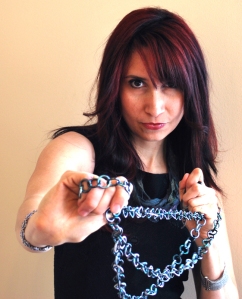 Mojica weaved her first maille in 2002 when she wanted to buy a chainmaille belt but couldn’t find anything that she really liked. She ended up buying some jump rings and making her own belt, thus sparking her passion. But she was often disappointed with the quality of the chainmaille supplies she found during the early years, feeling her artistic vision was compromised due to inferior material. Mojica, a perfectionist, couldn’t find a supplier that met her high standards, so she started Blue Buddha Boutique.

Since then, Mojica has been responsible for guiding and overseeing the company, crunching lots of numbers, designing jewelry, and creating new kits and instructions. The top chainmaille instructor in the Midwest, she teaches chainmaille locally and at out-of-state crafting shops and select bead/gem shows. In addition to having spent more than 1,000 hours teaching students from around the globe, Mojica has taught at the international Bead&Button Show and served as a guest instructor for The School of the Art Institute of Chicago.

A member of the Chicago Metal Arts Guild and Chicago Craft Mafia, Mojica is a contributing editor to Step by Step Wire Jewelry magazine and the author of Chained. Each month, Mojica offers pro bono one-on-one sessions to new artisans to help them build their businesses. She knows over 100 weaves and her work has appeared on CLTV, The New York Times, and The Chicago Tribune.

One thought on “Rebeca Mojica: The Self-Taught Artist Behind the World’s Largest Chainmaille Supplier”